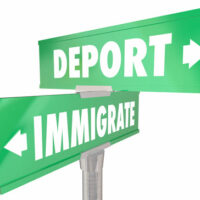 Deportation is obviously the worst-case scenario for people who are trying to settle in Florida. There are a number of different reasons that might result in your deportation. Illegal immigrants are at the highest risk of deportation, but you can still be deported even if you came to Florida legally. By understanding the most common factors that lead to people being deported in the Sunshine State, you can avoid this tragic outcome.

Of course, you can still fight back after you receive news that you are being deported. Get in touch with an immigration attorney in Florida, and you can give yourself the best possible chance of staying in this country. With help from one of these legal professionals, you can explore a number of potential strategies as you push back against deportation orders and fight for your rights.

Immigrants often get deported because they trust the wrong people. Make no mistake, there are countless people out there who prey on immigrants. From the infamous “coyotes” to unqualified attorneys, these people can easily get you deported if you put your safety in their hands. It doesn’t matter whether these individuals actually intend to get you deported or not. You’re better off trusting reliable, licensed professionals who stay on the right side of the law.

In 2020, it was reported that a 56-year-old man had been posing as an immigration attorney. He had filed hundreds of fake immigration applications on behalf of his “clients,” who were undocumented immigrants seeking identification in Florida. These victims lost millions of dollars, and many were ultimately deported. This is exactly why it’s so important to work with a qualified, fully-licensed immigration attorney.

People often get deported because they commit certain crimes. While not all crimes will result in deportation, it is in your best interests to avoid establishing a criminal record at all costs. Crimes related to drugs, violence, and human trafficking are all deportable offenses. If you commit virtually any aggravated felony, you are unlikely to stay very long in the United States.

For help from a skilled Palm Beach County immigration lawyer, reach out to Devore Law Group, P.A. We know that facing deportation can feel like a daunting prospect, but it’s important to remember that you’re not alone in this fight. With our help, you can use the legal system to stay in this country and push back against deportation orders. Our offices are conveniently located in Palm Beach Gardens, so book your consultation today.