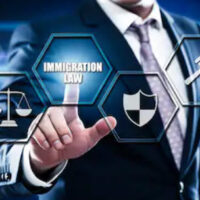 A while back, we wrote about how immigration courts were carrying on as normal during the COVID-19 crisis, putting the health and safety of immigrants, their lawyers, and the court personnel in jeopardy. It seems that the government is again ignoring the pandemic when it comes to immigrants, but this time, the immigrants that are being ignored or even persecuted, are the ones helping treat people who have contracted the Coronavirus.

Doctors’ Families at Risk of Deportation

As unbelievable as it may sound, the families of doctors who are in America with Visas, who are treating Coronavirus patients on the frontlines, are being targeted by the government for deportation. A recent news report tells of doctors who leave notes on deportation procedures for their families, in the event that they (the doctors) should die from the virus.

H-1B and Other Visas are Common in the Medical Fields

The problem is not an isolated one. About a quarter of the country’s licensed doctors are immigrants, in America on an H-1B visa. The H-1B visa is for those in professions that require technical, scientific or medical expertise, including doctors, nurses, and dentists, among many others.

The good news is that the threat of deportation only applies to those on temporary visas. The bad news is that for some nationalities, because of backlog, the wait for responses for their petitions for permanent visas (which would protect their families if something happened to the visa holder/doctor) could be as long as 90 years, according to a study.

Doctors aren’t just in the United States on the H-1B visas. Many are also in the US on J-1 Visas, which are for medical trainees. Obviously, with the need for medical professionals being so dire, even trainees and residents are vital to keep the population healthy and control the spread of the virus. They also face the same risks as full fledged doctors, working on the front line. They also face the risk of their families or dependents getting deported if they die or are incapacitated.

The only good news is that the government does now allow H-1B visa holders to practice medicine through telemedicine, something that was prohibited under the H-1B Visa system previously.

Contact the Palm Beach County immigration attorneys at Devore Law Group to help you with any immigration problem you or a family member may be having.

By Devore Law Group, P.A. | Posted on July 7, 2020
« CARES Act Excludes Financial Relief for Immigrants and Their Families
It’s Easier Than You Think to Lose Your Green Card »