What You Need To Know About The Civics Test For U.S. Citizenship 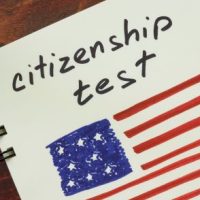 If you are applying for naturalization–i.e., you are seeking United States citizenship–one of the requirements is that you pass what is known as a civics test. This is basically a demonstration of your knowledge and understanding of basic facts about the history and government of the United States. An officer from U.S. Citizenship and Immigration Services (USCIS) administers the test by asking the applicant a number of questions selected at random from a list.

There has been some confusion recently over changes to the civics test. Or more accurately, there has been confusion because changes were announced to the test and then later walked back. This is due to policy differences between the Trump and Biden administrations. Here is a brief explanation of what happened:

Now, this does not mean that everyone who is required to take a civics test will be administered old/current test. Which test a citizenship applicant takes will depend on when they filed their application. If you filed your application before December 1, 2020 or on or after March 1, 2021, then you will take the test approved by the Biden administration (the 2008 test). But if you filed your application on or after December 1, 2020 and before March 1, 2021, then you may have to take the test approved by the Trump administration (the 2020 test) depending on when you had your initial interview with USCIS:

So how do the two tests actually differ? As suggested above, the 2020 test approved by the Trump administration is considered more difficult in terms of the type of knowledge examined. But the 2020 test is also more difficult to actually pass. Here is a brief rundown of some of the differences:

The civics test is just one part of the long process of naturalization. It can often seem overwhelming and confusing. That is why it is always a good idea to work with a qualified Palm Beach County citizenship and naturalization attorney who can walk you through all the steps. Contact the Devore Law Group today to schedule a consultation.

By Devore Law Group, P.A. | Posted on October 24, 2022
« How Long Could It Take To Get My Green Card?
How The “Marriage Fraud Bar” Could Prevent Your Spouse From Obtaining A Green Card »