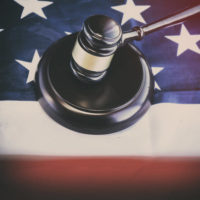 The judge did not completely strike down the rule, but rather put on a restraining order, which means that the government is prohibited from enforcing the rule, at least until the final decision on the law’s legality is determined in court. The policy had not actually gone into effect yet. It was not passed by congress, but rather implemented by the President through his executive order power.

The policy was made almost more difficult to abide by (and some say impossible) because immigrants had to show that if they qualified for a government health care subsidy based on income, that they had to reject that option. Not only does the subsidy make insurance more affordable for all Americans, but there is not even a way to reject the subsidy on the health insurance marketplace website.

This rule was separate from a previously announced “public charge” rule, which would have made it more difficult for immigrants to get favorable decisions if they were on any type of public assistance, such as food stamps, Medicare, or housing assistance. That policy was also blocked by courts.

Many saw both policies as hurdles for the poor, and making it easier for immigrants with money to enter into or remain in the country.

Health Insurance is Not a Motivator

Proponents say that the ability to procure health care is an incentive for people seeking to enter the country illegally. But studies do not bear this out.

The health insurance requirement initiative, if it was and if it eventually is implemented, is expected to keep out close to 400,000 immigrants. Many of those immigrants came to the U.S. legally, under existing immigration programs. The program also would make it more difficult for people here legally, to unite their family, by blocking family members from being able to enter the country.

By Devore Law Group, P.A. | Posted on March 23, 2020
« Undocumented Immigrants Gaining Rights to Obtain Driver’s Licenses
Will Marriage Allow You to Remain in the US? »