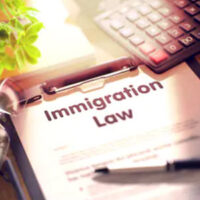 We have written in the past about the many kinds of crimes that can keep immigrants from obtaining important visas, green cards or other documentation. However, many are not aware that in very limited circumstances, there are waivers for people who have been convicted of certain crimes, which can allow them to remain in the country or otherwise can avoid negative repercussions from such convictions.

One such waiver is known as a 212(h) waiver. If an immigrant is inside the country physically, but not legally because of a prior criminal conviction, the 212(h) waiver can be of assistance. The waiver is available to anyone who has been convicted of any of the following crimes:

If there has been any conviction under any of these provisions, the waiver will allow the immigrant to keep their current immigration status, which could be enough to avoid deportation. Like most immigration provisions, there are a few requirements:

In most cases, even if all the requirements are met, it is still up to the discretion of the judge whether or not to grant the waiver.

As you may imagine in any crimes that may involve violence, it will be much harder to obtain the waiver. In fact, the law specifically states that with violent crimes, the applicant must show that denying the visa or denying admission would result in “exceptional and extremely unusual hardship.”